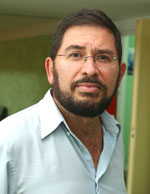 I was born in the beautiful town of Granada, Spain. It was in this University where I finished my Master in Physics. I then moved to the IBM Madrid Scientific Center, where I was confronted with the image processing challenges behind the emerging techniques, at the time, of three-dimensional electron microscopy (3D-EM) and the different atomic scanning techniques in whose development IBM was engaged. I defended my PhD in Molecular Biology at the University Autonoma of Madrid (UAM) in 1984.

I left for Albany, New York, in 1986, to join the Wadsworth Center of the NYS Department of Health, to work under the direction of Dr. Joachim Frank. My coming back to Madrid happened in 1989, setting up the BioComputing Unit of the newly established National Center for Biotechnology (CNB), nowadays the largest Center of the Spanish High Research Council (CSIC), located in the campus of the UAM.

Currently I keep busy in Madrid, fully engaged in my activities at the CNB and Instruct, after a period in which I was deeply involved in technology transfer, spinning of, maturing and finally selling to Perkin Elmer (PKI) our bioinformatics company Integromics. 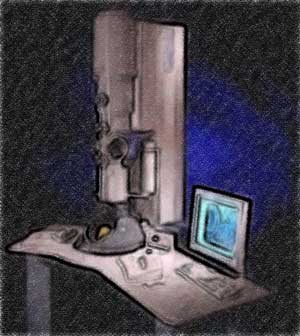 Originally trained at the University level as a Physicist, and having been exposed for six years in IBMto a broad range of computational aspects, it may appear natural that my introduction to the Biological arena was in the area of Structural Biology. In this way I have always being engaged in both the development of new image processing methods for the experimental determination of large macromolecular complex by three-dimensional electron microscopy (3D-EM), as well as in their practical application to concrete biological problems.

The need to organize the data that were being produced by 3D-EM lead us to another line of activity in the development of new structural databases, while the desire to extract as much information as possible from these databases naturally introduced us into the area of data mining. Along these lines, I coordinated the European project BioImage, which finally ended in the starting up of a branch of PDB devoted to structures determined by Electron Microscopy, currently known as EMDB and widely used in the field.

Technological transfer is one of the mandates stated in the CNB Mission, and as one of the actions towards its fulfilment we started in 2003 the spin-off company Integromics, that defines itself as “Understanding LIFE Complexity”, and it represents a fine blend of strong engineering and strong biology oriented to the development of new sofware tools for data management and data analysis in genomics and proteomics. We have already achieved worldwide impact and I am proud to serve as its Founder. The company was acquired in July 2014 by the American multinational Perkin Elmer (PKI). 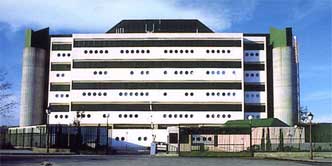 I was a predoc and postdoctoral student from 1981 to 1986 at the IBM Madrid Scientific Center (at the time, one of the twelve Scientific Center of IBM worldwide). From 1986 to 1989 I was a Research Associate at the Wadsworth Center, in Albany, New York. Then, from 1989 on I head the BioComputing Unit of the CNB, serving as Deputy Director for Research of the CNBfrom 1997 to 2002. Later on, during part of 2002 and the whole of 2003, I was involved in the definition of the strategic Spanish Research Plan 2004-2007 as Deputy Director General for Research Planning of the Science and Technology Ministery (on leave from the CNB-CSIC).

The extension to X-ray microscopy started in 2005, when the Spanish synchrotron ALBA was defining its first set of beam lines and, together with Prof. Carrascosa, we led the proposal for a Soft X-ray Microscope for cellular tomography, that entered in full operation in 2012.

Finally, in 2010 we won the European competition to become the Instruct Image Processing Center, working at the core of the development of a new generation of European Estrategic Infraestructures in the area of Structural Biology.

Of course, I cannot but warmly thank the different European, American, National and Regional Agencies as well as the CSIC, that help financing our interdisciplinary laboratory.